The Legionnaires Challenges quest in Anthem tasks players with opening up four tombs in order to progress the story. Each tomb challenge involves with their own challenges. These challenges consist of necessary actions and defeating enemies and others can be completed merely by wandering in Freeplay. To help you clear through the mission as quickly as possible, Joymmo.com puts together this Anthem Tomb of the Legionnaires Challenges Guide. In addition, Cheap Anthem Shard Packs are on sale at our website.

Where to find all four tomb challenges on the map?

The Anthem tombs are marked on your map at the points listed below:

Tomb of Cariff - under the giant ruins at the Sanctuary of Dunar
Tomb of Gawnes - at the base of the waterfall you’ll find here.
Tomb of Yvenia - follow the river south into the cave.
Tomb of Artinia - hard to miss at ground level, in the open, where the marker appears on the map.

After starting the Tomb mission, you can approach these doors and each one will give you the things you need to do to open the chamber. It’s basically a list of challenges to do in freeplay such as completing missions, opening treasure chests scoring multi kills and so on.

With that said, below is a guide of sorts explaining to you how to complete each leg of the quest. Some are extremely easy, some are just painfully difficult unless you get very lucky and will essentially ruin your entire Anthem experience for a couple of hours (that's just an opinion). Anyway here it goes, and good luck with the grind, Freelancer. 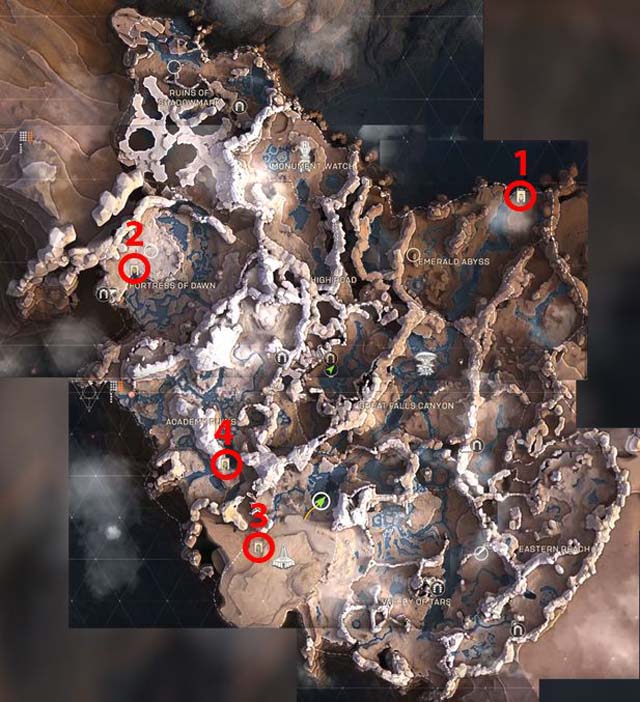 5 World Events (You've been doing those. They're the things with chests at the end)
30 Weapon Defeats. Just kill 30 guys with weapons
Weak Point Defeats. Get the killing blow on an enemy's weak point which is the part that flashes when big yellow numbers come up on hit.
Elite defeats. Kill enemies with Elite on their names

3 Missions. (Just do contracts)
30 Gear Defeats. (Just kill enemies using your abilities)
15 Combo triggers. Trigger 15 combos by using Primer abilities and Detonators. Primer abilities are denoted in the forge with a circle inside a circle near their name and Detonators are four-pointed stars.
3 Multi-kills. Kill 6-8 enemies in a period of...6 seconds I think. Every time you kill something the timer will reset. (Best to just go do a world event in easy mode freeplay)

50 Melee kills.
50 Ultimate Defeats. You're already doing this one right.
3 Legendary defeats. Kill 3 enemies with legendary in their name.

15 Chests. Just loot 15 chests. Right now you have to open them. On Friday it will trigger as long as you are close when the patch comes.
25 harvests. Those things you run by that glow if you run up to them they show an icon and if you hit them or hold F they break and drop a material item. That's a harvest.
3 Javelins repaired. Repair 3 downed allies or NPC allies.
10 collectibles. These things are harder to describe but they are similar to harvest but just add something to your codex instead. Runes on the wall, notes in the world, etc.

That’s the end of this guide. Hope it helps!