Progression is slightly different in Far Cry 5.In Far Cry 5, instead of farming XP, you get stronger by completing challenges and earning perk points. Perk points are skill points in Far Cry 5. It is used to unlock new skills (they are called perks, in the game).

There are 40 perks to unlock over the course of the game, split into four categories: Survivalist, Renegade, Assassin, and Prepper. There are also 10 perks tied to the Guns for Hire you can recruit. Among these skills, some skills are more useful than others. To save you time, below, we have listed top 6 best perks for players to unlock. It is best to employ them all, for the best results. 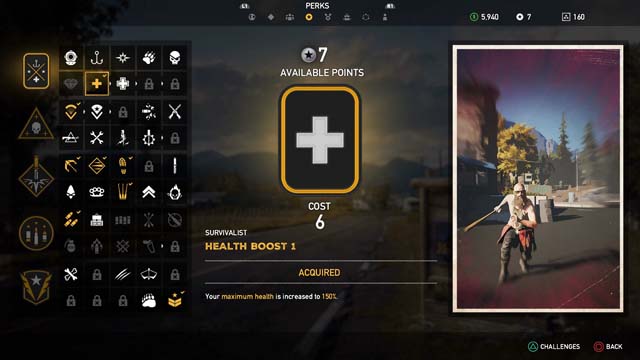 Additional Holster (8 SP) - Carry a 3rd weapon of any type in your weapon wheel.

To be best prepared for any situation, upgrading to the three-weapon holster is the way to go. Not only will you have more ammo on hand to keep fighting, but it lets you switch between sniping, close-range combat with a shotgun, and good mid-range heavy weapons like the assault rifle.

Parachute (1 SP) - Unlocks a parachute to deploy while falling.

Falling out of a plane without one sucks. If you’re planning on spending a lot of time in the air, unlock the wing suit right after that, as it’ll give you way more mobility in the air.

Stealth is a big part of Far Cry 5, and the default crouched movement speed is comically slow. Sneaky Sprint will essentially double this speed, letting you move around the world a lot faster.

Alongside Sneaky Sprint, Takedown Mastery is great if you’re trying to remain unseen. You’ll unlock the ability to silently take out groups of enemies standing close to one another, while also being able to land on them from above to take them out.

This one is extremely situational, but sometimes you just need to get to a good vantage point with a silenced sniper rifle, you know? The grapple will get you there.To unlock these perks faster, you can come and buy Cheap Far Cry 5 Credits at Joymmo.com, a professional online in-game currency store.

Couple of other things to note:

Get the repair tool first. Its cheap and will allow you to open safes. In these safes you will find titanium which is essential in crafting higher end equipment.

Upgrade the amount of weapons you can carry also pretty early. Having slots that allow a change of play style is essential especially for taking outposts down.

Get the binoculars. Planning an attack on an outpost is 100% necessary especially when going back for the 2nd or 3rd time.

Upgrading takedowns is always a good idea if you like that style of game play but if you like using your guns more definitely upgrade the ammo capacity of your favourite guns.