How to Easily Find and Kill Flyers in Apex Legends

A bunch of dragons carrying loot boxes are invading Apex Legends ahead of Season 2. You can also check out the Youtube video below for a look at them. The community has taken to calling them "Flyers."and if you shoot them down, you can get loot/death boxes. Those boxes bear the names of your friends, or maybe Respawn developers. It's not a terrible way to get loot. So, how to easily find flyers and kill them in Apex Legends?

Where do Flyers spawn?

Thanks to super helpful Apex Legends fan FrozenFoh, he has upload a post on reddit, detailing all the spawn locations for the fiery creatures. 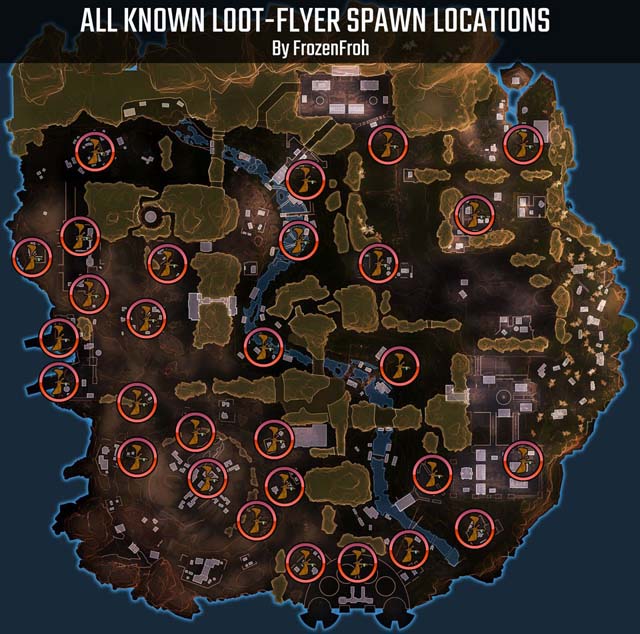 As you can see in the image above, Skull Town seems to be a hot spot for the Flyers, with seven possible spawn locations occurring near it. In addition, players will also have a very big chance of encountering dragons in the south side of the map, with the Water Treatment area alone having three known spawn locations.

By contrast, both Thunderdome and King's Canyon's east side is very barren in terms of dragon appearance.Fans guess that this is because of the tall trees, or 'Nessy' the Loch Ness Monster. Players have clocked appearances around the north-west side of the map, mainly at Air Base, Runoff, and Slum Lakes. Though, The Pits are seemingly a Flyer no-show.

How to easily kill flyers in Apex Legends?

You can find many Apex fans posting a bunch of Youtube videos of their encounters with the things. Naturally, the player immediately runs to find a weapon and starts to shoot the dragon as it flies. Here's someone taking some shots at one:

We see the numbers popping up as the dragon takes damage. Eventually, the dragon drops some loot, but in the video, we never see the dragon die. However, we can also see some threads in forum suggesting that they have managed to kill the dragons and that the death animation is cool. Those death boxes has "the name tag and banner from anyone on your friend's list on it." Essentially, Respawn gathers data from your friend’s list to make it seem like one of these dragons devoured your friend! By taking your revenge and aggression out on these vicious monsters, you can claim some decent loot. Respawn and publisher EA Games are yet to make any official statement regarding the flyers though, but there may be a very good in-game reason for their appearance now.

However, it seems that much larger dragons will be coming at some point in the near future according to infamous Apex data miner "That1MiningGuy". As you can see in a cutout below, he referred to the current Flyers as "scouts", and suggested bigger dragons soon come to the game.

So, how do you think of these dragons and loot boxes? We will keep the story updated, so stay tune to Joymmo.com, a professional in-game currency store for Cheap Apex Legends Coins.