In celebration of ArcheAge’s upcoming Echoes of Hiram content update, the ArcheAge Team is holding an event extravaganza on the game’s PTS (Public Test Server). Testers will be able to will be able to see Eastern Hiram Mountains first hand and participate in events and win prizes for their Live Server characters. 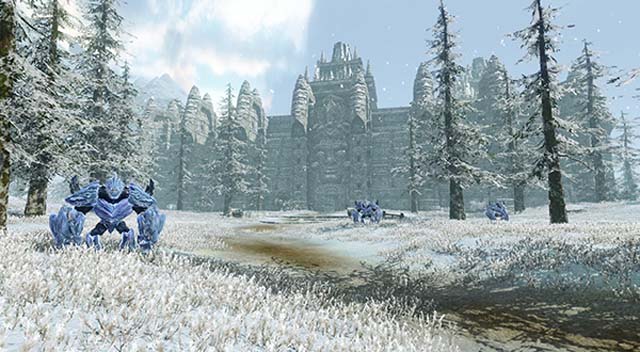 The path connecting the Eastern Hiram Mountains with the Western parts has been covered in snow, making it impossible to cross to the other side.But now the torches in the Hall of Warriors are lit again and the snowy path can safely be travelled with the help of the loyal Owlinas. While taking in the beauty of this historical land, don’t forget to be on your guard. The most vicious creatures in Erenor can be encountered here, along with the Abyssal Legion, who is conducting unsettling experiments at their base camp!”

The festivities begin on Monday June 25, 2019 at 10 AM PDT (5 PM UTC) and players will be met with portals in Austera and Marianople. We have a detailed event list, with a new event on the roster to test out on PTS1.

Trivia – Be the first to answer the trivia questions related to the Hiram Mountains and win 10x Manastorm Crystals per correct answer on your Live Server character!
Protect the CM – The CM is squishy, and needs to make their way to the Northern Gate from the Hall of Warriors… Can you protect them from the dangers of Eastern Hiram Mountains? If you do, all participants get 10x Sweet Candy on the live server!
Monster Madness – Oh no, the monsters are out of control! Defeat all five waves of the monsters and all participants will receive 5x Loyalty Tokens per waves survived!

The rewards from all the events will be sent in the following weeks of the event.

Echoes of Hiram is set to launch on the live servers at the end of June. The update will bring the Glorious Hiram Guardian equipment, daily quests that provide precious items from the new zone,most notably, an increased Ancestral level cap.

players will be taking off for the Eastern Hiram mountains and enjoy a new level 55 cap (up from 34). In addition, players can compete for a place on the leaderboard to "show the highest Ancestral level on a server". Those who are below the average level on the Top 20 leaderboard will getget a hunting buff to assist them in leveling

In addition, players will also find new ways to improve gear and to "awaken" the Legendary Mistsong Summit armor. The Abyssal Library also offers players a way to get better gear.

You can read full path here.

Keep an eye out on Joymmo.com for some more updates in the upcoming weeks and Cheap ArcheAge Gold, we’re excited to show you what’s coming soon.