GTA Online: Celebrate with Independence Day Specials, The Return of the Patriot Beer Hat and More

Grand Theft Auto Online joins the nation in celebrating Independence Day with a variety of patriotic in-game goodies and a huge holiday sale. Rockstar Games will be slashing 40% off the price of selected cars, yachts, and properties. Independence Day-themed gear will also be available at 40% off from now until July 10th.

Independence Day is a special time in Southern San Andreas. Get primed to launch fireworks through the streets of the city, take the Star-Spangled Liberator monster trucking through the country and strap on a patriotic Beer Hat to celebrate freedom. You can also sink your teeth into mouthwatering bonuses on a range of businesses, discounts on your favorite patriotic items and much more.

Red, white and blue favorites make their return to stores this week. Whether you’re dressing head-to-toe in stars and stripes and ripping the lid off Tony's Fun House or outfitting your collection of future-tech Mk II armory with patriotic liveries, you can jump into GTA Online to pick up these specialty items at a 40% discount:

Nothing says freedom like being your own criminal boss. This week makes the hustle extra sweet with a range of big perks and payouts for entrepreneurs across the state - and if you’re looking to expand your enterprise you can also take advantage of sales on several business properties.

Players can also earn three times as much GTA dollars from smugglers' sales missions and two times as much from gunfights and special cargo sales missions. Client Jobs and missile base missions will also reward players with double bonus points during the campaign. Nightclub revenues and shootouts will also run at twice the rate throughout the week. 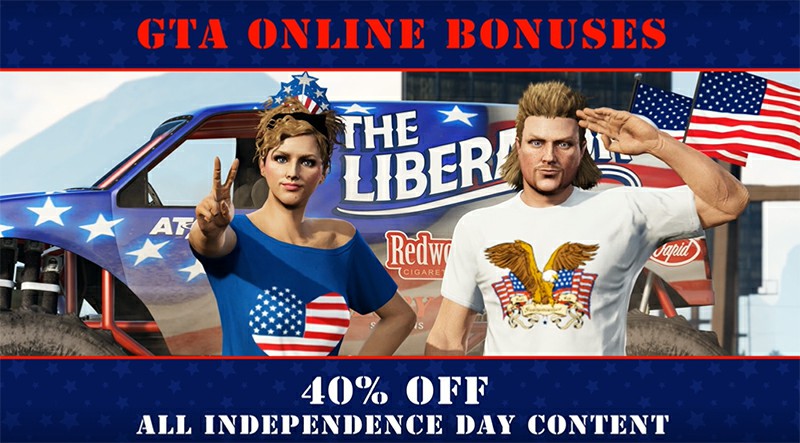 In addition to the Independence Day supplies, you can take a whopping 75% off all ammunition, including Mk II rounds. There are also discounts on all sorts of vehicles - including rocket boosted Special Vehicles and their philosophical opposite, the Atomic Blimp – as well as all Facilities, Hangars, Nightclubs and their Renovations and more. Take 40% off the following through July 10th:

Head over to the Grand Theft Auto Online official site for more details.

« Fortnite x Stranger Things Is Now Live And The New Skins Have Leaked
Arena of Valor Guide: How to Counter Florentino - Hero Picks »