MapleStory M has been patched with the Legends Return update. This action-packed update brings a lot of exciting new features. First, this update allows players to select from eight Maple World Legends in the new PvP dungeon. The dungeon is available in both Ranked and Free Modes and sends two teams of three against one another in a race to the finish. Ranked Mode players will receive seasonal rewards based on the achieved rank and the number of your wins and loses.Free Mode is quite different. Free Mode players can fight in teams of up to six in wild battles that may be unbalanced for extra challenge. However, it's “free” mode after all, and it’s mostly used for fun. 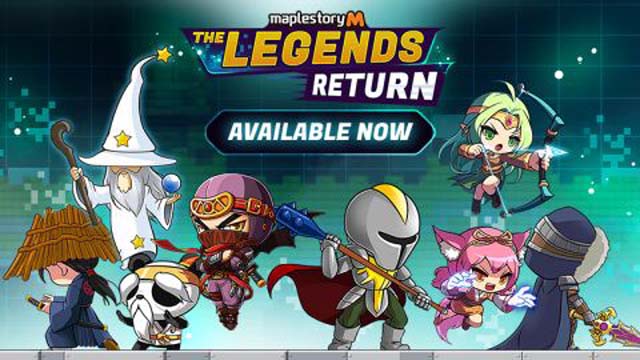 Also, as part of the update, the following two new in-game events are also added to the game.

Kemdi's Dice Game – From April 24 to May 9, a one-of-a-kind board game experience will be available where players can earn dice through hunting. Players can then roll the special dice to advance their pieces on the board and earn rewards. Those who complete the quest will then unlock the mysterious Kemdi’s Gift Box.

Among the other changes of the update, 4-mini games have been added in the?Mini Game Station, along with some improvements on Gold Leaf Shop,character rebalancing work and general bug fixes.

For more news and guides on MapleStory M, stay tuned to Joymmo.com.If you don't have enough time to earn Mesos in the game, Cheap MapleStory M Mesos is on sale at our website as well.