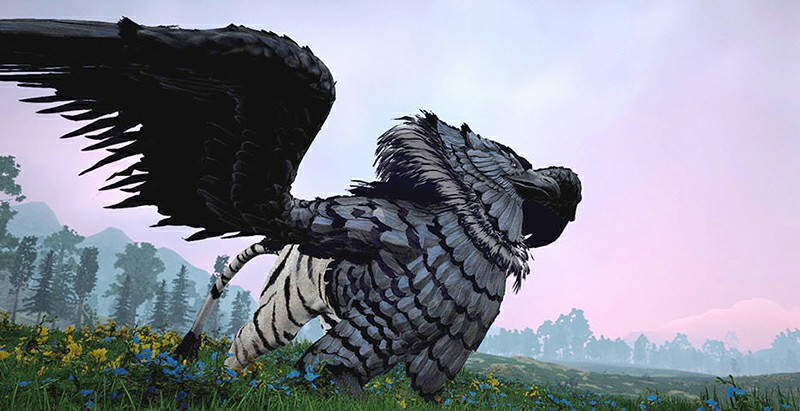 Terror reigns from above as the new Guild Boss, Ahib Griffon, terrorizes Kamasylvia. To start the fight, you will need to exchange 20 Essence of Fury for 1 Operation Orders from Kamasylvia from Guild managers across the Black Desert world. Using this item will set a path to Liudia, who will exchange the Operation Orders from Kamasylvia with a 'King of the Navarn Steppe' Summon scroll and 5 Spirit's Distress Calls. At this point you will be able to select which level of difficulty you wish your guild to face.

Taking down the Ahib Griffon is no easy feat, and when you use the summon scroll you will be backed up by a legion of Ganelle, who will aid your guild in battle. If their HP drops below 10%, or the Ahib Griffons HP is less than 20%, the Ganelle will exit the battlefield to recoup.

The Ganelle Archers can also release a powerful volley of arrows at the Ahib Griffon if you use the Spirit's Distress Call in the right spot. Once these arrows connect with the Ahib Griffon, he will cry out in pain and take heavy damage as he hits the ground.

Defeating the Ahib Griffon will reward you with drops such as the Griffon's Helmet, JIN/BON/WON magic Crystal- Viper or other precious items!

The Forest Path Wagon is a new wagon that makes it's way to the roads of Black Desert. This Wagon never expires, and also boasts the fastest speed, largest inventory and highest weight limit.

The Kamasylvian scroll bosses are now able to be awakened. When you collect your daily/weekly boss scrolls, you can now select the awakened scrolls for the following bosses:

The Chief of Velia has long wanted the Velia to become a central hub for mercantile trading, and his dream is now one step closer to fruition. Work has finally been completed, and the new Wharf is ready to be revealed. A new Tavern has been opened called the 'Dancing Marlin' has been added, and Wharf Manager Croix has been moved to the new wharf.

When the fishing changes were implemented (sorting by grade), we realised that the 'trash items' like Fish Bones, Fertilizer Sack etc were now being picked up. We considered reworking the system so that they could be filtered out, but decided instead on giving these items value in the Black Desert world. Therefore trash items that can be picked up from fishing can now be exchanged for more useful items. Below is the list of currently active items available for exchange.

※ Mounts that are currently stabled in Muiquun will be moved to the Stable in Valencia.

We are making a few fixes to classes in Black Desert. This is mostly skill fixes to ensure that the damage dealt is consistent with the intended effects.

The skill 'Gather Around' has been added. This skill is used with Shai's Florang, and pulls enemies closer together.
'Sun, Moon, Stars', 'Time to Shine!', 'Shout to the Sky', and 'Summer Rain' now increase their range the longer the skill is maintained.
Fixed skills used with 'Tute' and 'Tring' so that it is easier to transition into 'Twirl' and 'Sprinkle-Sparkle'
'Misty Haze', 'Delusive Light', 'Sun, Moon, Stars', 'Shout to the Sky', 'Time to Shine!' and 'Summer Rain' will now correctly apply their buffs if the Shai moves as the instrument is coming out.
When multiple Shai cast 'Misty Haze', 'Delusive Light' or 'Sun, Moon, Stars', the buffs will resolve as follows:
- Skill Level takes priority over the enhancement level of the caster's Sol.
- When the enhancement level of the Sol is the same, the higher Skill level will have priority.
- When the Skill levels are identical, the higher enhancement level has priority.

If both skills are cast at the same time, Caster B's buff will be applied.

If both skills are cast at the same time, Caster A's buff will be applied.

In the Central Market, the maximum price jump has been decreased from +/-10% to +/- 7.5%.
Weapons and Armors from +13 to +15 enhancement levels are now grouped together on the Central Market.
Server optimization function has been added during world boss periods. Due to this function, adventurers would feel less delay on action while fighting against world bosses.