How to Best Play The M48 Patton in World of Tanks 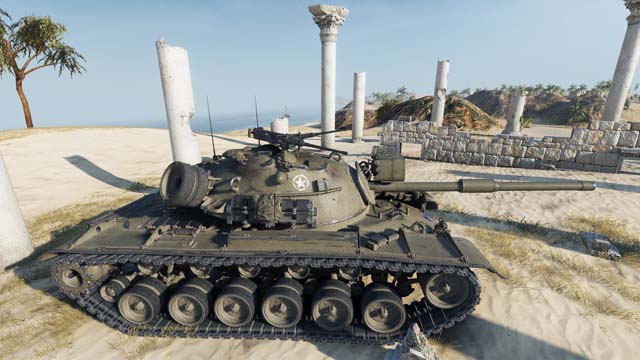 Rammer/vents/vert stab. Especially on the patton, you already hit max view range without optics. vents give you an extra 10-20 view range along with more reload and accuracy etc. Vert stab helps out snap shooting and general accuracy as well. There is no point on getting optics for most tier 10 and even 9 vehicles. As long as you have situation awareness, you'll hit max on a lot of tanks. It's what pros do and most highly skilled players. Optics can be useful if the tank has bad view range like an aggressive torpedoes or heavy tanks.

Now, as for actually playing the tank, the Patton is well-known as a snapshotting monster, meaning that it can poke over ridges and around corners and quickly snap off accurate shots and retreat into cover before the enemy can even try to aim their gun back at you. Take advantage of your great turret and well-sloped upper plate. Poorly aimed shots that hit your upper plate will bounce and any shot into your turret that doesn't hit your now much smaller cupola will bounce (just don't test the HESH slingers or a Jageroo).

Additionally, the Patton is also excellent in supporting heavy tanks. Your DPM is very good, meaning that for almost any heavy tank or tank destroyer in the game, whenever they fire one shot, you should be able to poke out and fire two at them before they can fire again (just watch out for autoloaders like the T57 Heavy).

Another role the Patton can fill is the anti-scout. Your armor profile is good enough to where light tanks will have to carefully aim their shots in order to penetrate you, and that is a very difficult task when driving around at 50+ kph. If they auto-aim your hull, they will bounce unless you give them your side/rear. Meanwhile, your snappy, high-DPM gun will be burning them down 390 HP at a time. The gun also fires its shells at a velocity to where you barely even have to lead your shots against light tanks. And god forbid they make the mistake of letting you ram them, because you weigh nearly 50 tons. Even the heaviest light tank in the game, the WZ-132-1, coming in at 30 tons, wants nothing to do with that.

Last, although the gun is incredibly snappy, it will troll you at times, which is infuriating. Just remember that you have good DPM and you'll have another round ready quickly. Thirdly, your lower plate and side armor is not good, so do not try sidescraping in this tank, it will not work. Finally, try and train Safe Stowage on your crew, because I have found that frontally penetrating shots, especially if they are near the front drive wheel, will often damage your ammo rack.