Pro Tips On Killing The Predator in Ghost Recon: Wildlands

Tom Clancy's Ghost Recon: Wildlands' free DLC, The Hunt tasks players to locate the famous alien cinematic character the Predator in Bolivia and kill them. By killing them, players are rewarded with new customization items, including Predator's own thermal-vision helmet. However, it's not an easy battle and many players get frustrated. Therefore, Joymmo.com, as a professional online in-game currency store are sharing with your some realistic tips to make it easier for you. If you are in need of Cheap Ghost Recon Credits, you can also come to our website. Now let's go in for tips. 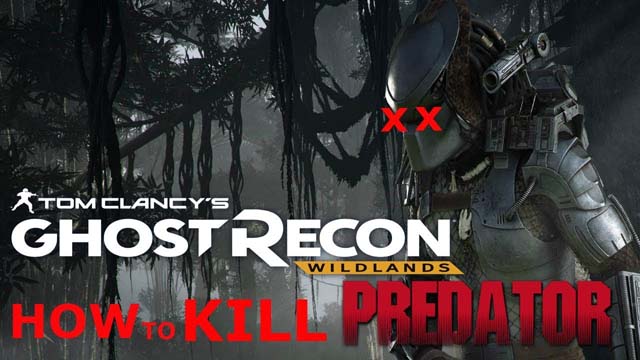 How to kill the Predator fast and easy in Ghost Recon: Wildlands?

Join a co-op game with 3 other people. Select the mission. As long as you're with a half-decent group of people, it's much easier with real people. However, it's best to have a full squad (To assist with healing while others staying on watch because the damn thing is quick to shoot you with his plasma cannon of doom).

When going into the fight, stand on the very outside, not in the actual yellow area yet. Call in your rebel army, and call in the rebel diversion anywhere in the yellow (I called it in near the ammo box)

Once the rebels are right next to you (excluding the diversion rebels), walk into the fight. The rebels are a key part to this strategy, as they will be your meat shields, so the more the better.

Order your squad to fire, not sure if this helps at all but it's what I did and they seemed to all move out in different areas, which is useful.

When the predator appears, stay near a tree, NOT the centre. Trees are great because you can get easy cover from all angles, as when he locks onto you, you only have to move a metre or so to get into cover.

Your squad and rebels will act as bait, allowing the predator to target them instead of you, when he targets them, try to shoot him before he fires his plasma caster, just to conserve troops.

If you can hit the predator as he runs cloaked, and spot him fast enough when he uncloaks to roar at you, it helps.

The key is avoiding the plasma blasts. Expect to move immediately when you hear him uncloak and laser target someone. I stand on a rock that I can drop down from on every side. Secondly, if you are targeted, don't try to fire back... just drop off the side of the rock and go prone. The blast should hit your cover or miss. In solo, the predator will then target a squadmate; quickly find the predator and shoot him... your squad should revive. In co-op, either shoot the predator quickly when he targets someone else, or avoid the blasts. One good tactic when fighting is to use powerful firearm that can deliver most damage in single shot like HTI sniper rifle.

Whether be it online coop or solo, don't bother reviving your teammates as soon as they go down because Predator has tendency to appear and shoot his OP plasma balls when reviving someone. There is a small window of opportunity to revive your teammates right after shooting Predator (to point where he leaps again). Just stay around the rock or any other cover and shoot the alien guy in the face until he coughs blood.

That's the end of this guide. Hopefully this helps you out, and let me know how you got on! For more news and guides on Tom Clancy's Ghost Recon Wildlands, stay tuned to Joymmo.com.

« Final Fantasy XIV Crossover Event Guide - How To Get The FFXIV Regalia Mount
What are the game modes of 8 Ball Pool? »