Fallout 76 Is Getting a New Battle Royale Map: Morgantown 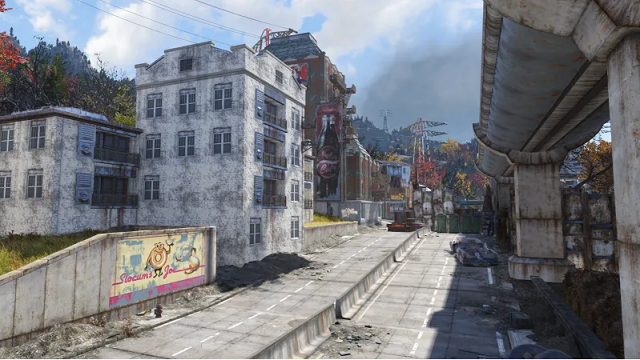 Bethesda revealed some new features of Fallout 76 at the QuakeCon conference on the 29th, including: Battle Royale "Nuclear Winter" will add a new map: Morgantown, and will also add some new copies. In addition, Bethesda intends to announce the updated route information for the players in the next few days.

Morgantown's Nuclear Winter map will arrive in September; before that, on Aug. 20, comes the Vault 94 raid. That involves players in groups of four taking on one of three missions on a weekly rotation. (Players may also compete in groups smaller than four). Legendary items will be among the rewards on offer.

The new map is based on an area of Fallout 76 called Morgantown and features locations such as the Vault-Tec University and the Morgantown Airport. It is also home to the highest point in Appalachia, which could add a bit more elevation to the battle royale mode. The developers also mentioned that players would take on enemies from other locations that aren't usually found in Morgantown — such as the Grafton Monster.

The Morgantown location will also allow for different regional PvE enemies to enter the mix, like the Grafton Monster. There's also a big lake in the zone, which could make for a nifty way for players to get quickly irradiated and gain mutations (in Nuclear Winter, mutations only have positive side-effects, no negatives).

Beyond these two bigger pieces of new, Bethesda shared a bit more information about the upcoming Wastelanders update. This is the update that will add NPCs into Fallout 76. It was confirmed at the panel today that players will talk to these NPCs using dialogue trees that are, according to Bethesda, more like Fallout 3 than Fallout 4. Bethesda is planning on releasing the Wastelanders update in November of this year.

Finally, Fallout 76 will be getting private servers, and those will be showing up "sooner than you think," the developers said. Here again, they declined to commit to a specific date on this feature, so it's not clear exactly what "soon" means in this context.

Fallout 76 is currently available on PC, PS4 and Xbox One, and interested players can try it out.