Fallout 76 Guide: Where To Find Flatwoods Monsters And How To Defeat It

There are monsters crawling out of every corner in the Appalachian wastelands of Fallout 76. Unique cryptids like the Mothman and Wendigo are incredibly rare and hard to find if you don't know where to look, especially the mysterious Flatwoods Monster. However, there are places (and quests) you can try to encounter them. 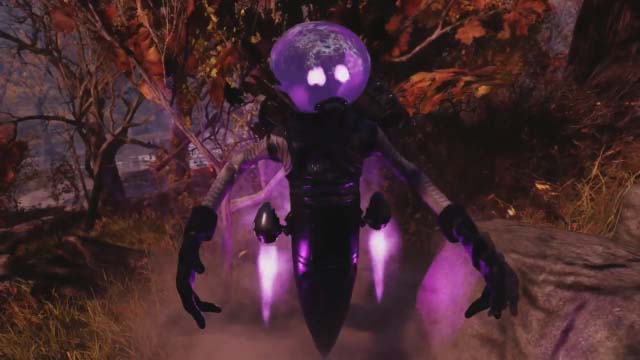 Where To Find Flatwoods Monster In Fallout 76?

You can check the image above to see what this monster looks like. As you can see in the image above, it is one of those alien creatures who get a purple space helmet on its small withered head, with large purple eyes burning bright and is 10-foot-tal. It will emit a strange hiss sound when it flat towards you.

Although there's no way to guarantee encountering a Flatwoods Monster, there are some locationswhere they seem to spawn more reliably. The known locations of the Flatwoods Monster in Fallout 76 are as follows:

In these locations, players stand the chance of running into a number of variants of the Flatwoods Monster, including both hostile and non-hostile varieties, if you keep returning and logging into different servers. Note that only the hostile form can actually be killed; the passive form will simply vanish if players attack or approach it.

How To Defeat The Fallout 76 Flatwoods Monster?

Flatwoods Monster, are hard to defeat, as they can can teleport and regenerate large amounts of health. If you happen to come across a non-hostile Flatwoods Monster, you likely won't be able to damage it, as it will teleport away as soon as you get near or fire a shot. However, it can be killed, if you master some tricks. In addition, you can unlock more powerful weapons with Cheap Fallout 76 Bottle Caps from Joymmo.com.

Here's our simple but effective advice:

First, once those monsters are nearing you, they will make some strange noise. Once you've heard those noise, it is time to be prepared with your weapons and spot which direction they are. Once in a fight, just keep moving and circling until it reappears (it ought to, anyway). Avoid its laser fire and open fire every time it reappears. It will be a bit of a slog, but it can be killed. Moreover, you will be rewarded with good loot from the corpse of the Flatwoods Monster.

That's all you need to know to fight a Flatwoods monster in Fallout 76. For more news and guides on Fallout 76, stay tuned to Joymmo.com, a pro online in-game currency store.

« MLB The Show 19 Special Diamonds, Flashbacks, Legends, All You Need To Know
How To Farm XP And Level Up Fast In Apex Legends Battle Pass Season One »