Put on your favorite costume and meet at the Whitespring for a week of explosive fun during our upcoming Mischief Night Seasonal Event.

Put on your favorite outfit and meet in Whitespring for a week of explosive fun during our upcoming Mischief Night Seasonal Event. 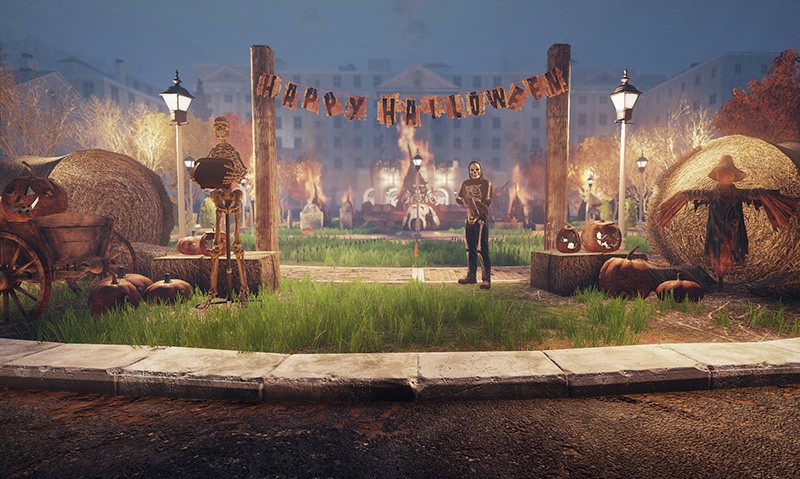 SPREAD SOME MAYHEM WITH MISCHIEF NIGHT!

We're entering that eerie time of year when the nights are growing longer, providing the perfect cover for tricks, treats, and a little costumed mayhem during our upcoming Mischief Night Seasonal Event! Mischief Night will be available for one week, starting at 12:00 p.m. EDT on October 29 until 12:00 p.m. EDT on November 5. Make sure you're ready to join in the fun by catching the event details below.

JES-2R, an Eyebot that seems to have had a few wires knocked loose, is planning to gather up groups of devious Dwellers to run wild at the Whitespring. Gather with other troublemakers at the Mischief Pyre near the Springhouse Gazebo for an explosive tour of the resort's park, cottages, and of course, its immaculate Courtyard. Give the guards a fright along the way by blowing up cars, expressing your artistic side on walls, and forking the lawns, among other activities. You can even stop by candy bowls at the cottages to try your luck for a delightful treat, or a nasty trick.
However, it's all fun and games until the Whitespring's Elite Security Force catches on to your mischievous deeds. They'll be on high alert during Mischief Night, so bring something to defend yourself and stop them from putting a damper on the festivities.

If you and your groupmates manage to meet JES-2R’s mischief quotas, you'll get some XP and loot, including a chance for new themed items, like costumes, jack-o-lanterns, and more. Wear your favorite costume to Mischief Night to earn double progress toward your objectives and unlock exclusive themed rewards. Costumes include ones that you've found or crafted in-game, ones that you've unlocked in the Atomic Shop, and even Fasnacht Masks.
Mischief Night will begin every hour on the hour and, since it's a Public Event, you'll be able to fast travel to it for free. Get ready to turn the Whitespring upside down, and be sure to grab a few treats along the way.

Give yourselves a hearty pat on the back, Dwellers! You've been hard at work wiping Appalachia clean of more than 21 million Scorched so far during the Take Out the Trash challenge. That's well beyond the original goal of 8 million Scorched kills, and the Purveyor is preparing for a new 25% off Legendary Sale from October 17 – 21.
You've also unlocked the Honeybeast Player Icon and Vault-Tec Flamer Skin rewards by completing the first two stretch goals, and you'll be able to claim these items for free in the Atomic Shop starting Tuesday, October 15.
If the community manages to meet the final stretch goal of 35 million Scorched kills by October 14, the Purveyor has promised to increase her Legendary Sale discount to a massive 50% off. Rally for one last big push to exterminate the Scorched this weekend and keep an eye on challenge progress by visiting the Project Clean Appalachia event page.

THANKS FOR YOUR COMMUNITY EVENTS FEEDBACK!

Thank you to everyone who dropped by our Community Events Feedback thread last week to share your thoughts on Project Clean Appalachia with us. We have now closed the thread so that we can compile your replies and begin planning out our next Community Event with your requests and suggestions in mind. With your help, we know that our next event will be even more fun and rewarding for everyone!

« GTA Online discounts: The Ocelot Jugular and King of the Hill Mode, Plus Double Cash on Special Cargo Sales, Client Jobs & More
Runescape "The Ranch Out of Time" Patch Notes »