Boss fights are one of most challenging and fun factors in Arcane Legends, and Alargan, also referred to the "Dragon Lord" are the final boss of your dragon adventure are much harder to defeat, even for the toughest of warriors. So, if you are in the same boat, in this Alargan guide, we'll be showing you how to defeat this devastating monsters. 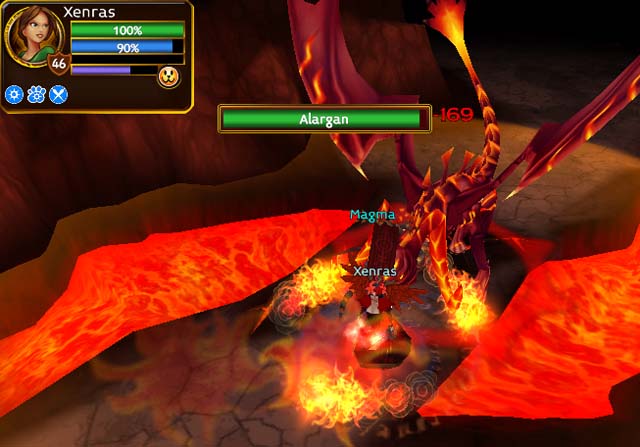 For those uninitiated, Boss HP regeneration means that when you drag a boss its "normal" area, it will return to its place with fully recovered HP. So, keep in mind that do not drag bosses out of range next time when you the boss is going after you.

Team Up or Playing Solo

In Arcane legends, if you choose team fights, both bosses' damage and health pool will increase.
Therefore, some players would rather fight through the map solo rather than facing the boss with a team. However, since Boss fights can be quite tough, it would be more efficient to team up with other players, especially matched up with experienced players.

In fact, the pets can help you tremendously against the various bosses in the game. In general, the pets that you want to go for disable moves such as Flap Jack to stun the boss, or you can go for damage boost pets such as Ribbits to power up your damage output.

How To Defeat Alargan in Arcane Legends Solo?

When solo, this boss can be challenging. Alargan has a devastating tail attack. It attacks you like a scorpion with its tail and leaves a lot of damage while doing so. The Arcane ring bling type halo around Ala indicates its "rage" mode. To avoid this, all you can do is to run, unless you are a good tank and can spam pots fast enough. To counter this rage mode, given time, he would do his conical red-zone attack, and you have to move right to avoid it. Be sure to blow VB by now. Get HoR as he will pull you now if he didn't earlier and wham you. Use Ribbit's AA, and hammer your way for a while. Should lower his health by quite a significant amount. However, keeping your pet engaged can be a challenge. If you get pulled while your pet isn't engaged, his AA will miss and you will die. In addition, you have to perform your pet's AA quickly. If you wait for the pull to finish, the AA stun may be late and you will die. So, if y ou don't have a stun pet, you can get yourself one with Cheap Arcane Legends Gold from Joymmo.com.

The trick to survival is moving in anti-clockwise direction in a circular manner. Stick to the walls. This boss will keep facing you so move SLOWLY, allowing Ala to move in your footsteps hence.

Hopefully, with this guide, you can kill Alargan easily. For more Arcane Legends news and guides on the game, stay tuned to Joymmo.com.

« How To Play Wraith Effectively In Apex Legends
Fortnite Map Guide: All The Chest Locations And The Best Landing Spots »