How To Beat Fire Dragon Solo In MapleStory 2

It's difficult to go solo on dungeons in MapleStory 2, nonetheless the Hard Dungeon. In MapleStory 2, you will need a minimum of 2100 GS (Gear Score) points to unlock MS2 Hard difficulty dungeons. If you haven't unlock it yet, you can check our previous MapleStory 2 Gear Score Guide at our website: Joymmo.com, where you can also buy Cheap MapleStory 2 Mesos. Today, we'll be focus on on of those Hard Dungeons - The Fire Dragon, a Maplestory 2 Hard Dungeon Adventure which features the boss "Pyrros Fard", a big fiery beast. To help you out, we made up this MS2 Fire Dragon Guide, covering strategies and preparation you need to know to defeat this monsters when playing solo.

How To Beat Fire Dragon In MapleStory 2?

Before the battle beginning, you and your friends will be transported to a volcano-based landscape with a bridge. Once you reach the ladders on the other side of the bridge in volcano-based landscape, the raid technically begins, and a 30 second timer will start. At the end of this timer, the bridge disappears. Therefore, if you misses crossing this bridge, you will not be able to participate in the raid.

Prepare Potions On A Hotkey

As with this, Instant healing potions are ideal, but Healing-over-time potions are also nice to mitigate the burn damage from the fire dragon. 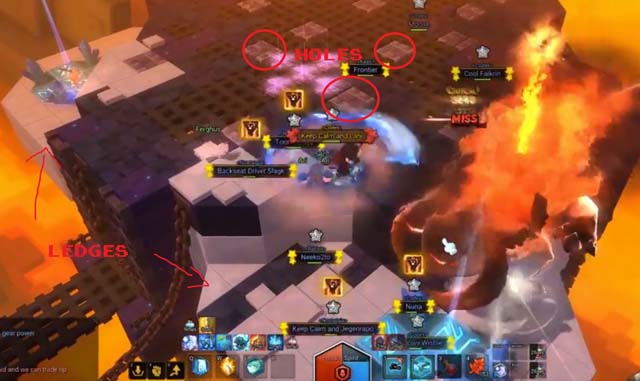 As you can check in the image above, Stage 1 is a simple diamond-shaped area, with two ledges on the south-west and north-west areas. Use these ledges to your advantage to dodge the boss's moves! Also if you get burned you can jump on the blue parts of the ledge to heal the burn! Secondly, there are certain areas of the map that have holes. These holes allow you to evade abilities, and are very useful if you have no ledge to jump down to. The ideal is to stay near a hole and make sure that you are able to drop down them at a moment's notice. This will be crucial.

In stage one, The dragon will use a dashing skill for the most part here. Just keep your camera on him and don't stay in front of him. If you're the one he's targeting dashing off the ledge is always an easy dodge path.

Once he's done dodging (he'll be at a corner of the map) he'll use a tail strike attack. Once you see this tail flicking, either run off to the nearest ledge, or simply get out of range. Alternatively, you have the option of hanging on to the dragon as he's about to flick, allowing you to dodge.?Another attack he will use is a fire breathe attack several times in a row, this is the most annoying because of the short charge time. Just avoid it once he starts spewing lava your way. Sometimes, he'll breathe in two directions, so just avoid the second breath if that happens. Again, not too difficult.

He'll now start a combination of these skills again, usually starting with dashing and tail swipe. As he gets lower he'll add a few more skills into the mix which is an undodgeable fire breathe skill twice in a row. He also has an aoe stun. honestly this shouldn't be a worry at all;he usually doesn't start attacking until the stun wears off, So you have a decent amount of leeway.?But if you want to maximize dmg just spare the extra second to jump off the ledge to dodge it if you can.

Once the boxes disappear and he gets low enough he'll start using his laser skill, which is an almost one shot kill. He stands on his hind legs and begins a short charge up time before using it, dodge it by using the ledge or running into the box.

Once he hits 20mil hp he'll run away to the next stage. The lava path hurts, stand on blue fairies to get a buff to cross safely. When you do cross wait for your priest/knight to come before you start because you NEED them here and the boss starts to attack immediately after you start to hit him. He'll now get a new ability:shoot fireballs. An interesting thing to note: the fireballs don't do any damage upon impact. Instead, they create small circles of fire on the ground that, after a small amount of time, explode and knock you up to deal a moderate amount of damage. So avoid these circles and you're good.

Then he'll start using the skills from part 1 too (besides the dashing) and stop using the aoe firebreathe skill. Now just continue to dodge using the boxes and whittle him down!

« Fallout 76 Survival Mode Beta Begins Next Week And Here’s A Preview
MLB The Show 19 Special Diamonds, Flashbacks, Legends, All You Need To Know »