Gold is the universal in-game currency in Elder Scroll Online, with which you can buy a specific set of expensive equipment, or buy a house of your own (and furnish it). however, making gold in The Elder Scrolls Online can be a bit daunting task, especially for newer players. Fear not, this guide is going to introduce you some efficient ways to make gold fast. 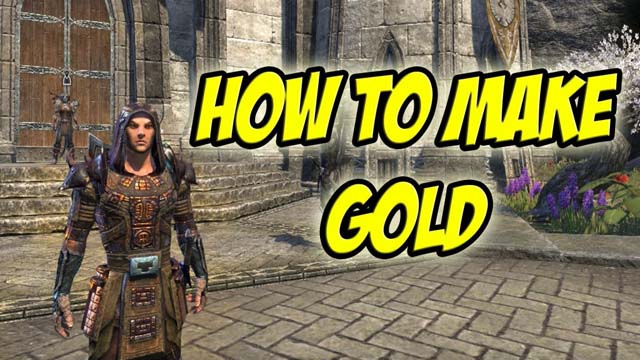 Daily writs help, even if your alts don't have leveled crafting yet, level 1 writs are still worth the time as they have the same chance as max-level writs to yield a survey report which can be sent to your main and used to get loads of max-level resources.

You should also have every character slot filled with an alt that has at least 12 in each crafting skill and level 2 hirelings to get a chance at gold upgrade mats every day.

Aside from that, there are numerous farming methods from just farming nodes in a condense, unpopulated zone, farming nodes in craglorn for nirn, farming certain dolmen trains or world boss routes to get valuable sets like Spriggans.

You can also make a lot of gold by getting into a good trader guild and finding items that you can reliably flip for profit. This is hard to advise you on as it will depend on your server, which guild your in and what the other traders in that area are like. For me personally, I can flip kuta from 6.5k to 9k really really fast for steady run-rate profit. I can also make reliable 2k margin on purple glyphs which sell as fast as I can list them. These are not huge gains per item but they sell very fast and reliably so it makes me probably 50-100k per day with virtually zero effort. If your on PC and have the benefit of mods (sadly I do not), you can make bigger gains by spotting items that are listed well below normal value.

Look for public dungeons with imperial type enemies such as crimson raiders, imperial mobs drop 30plus gold a pop. Hit a public dungeon or delve sweep and clear (mobs, bosses, containers) sell all white and green drops to merchant, decon blue or higher. Extra cash flow if your clearing a dungeon in a zone with preferred BiS starter gear like spriggans sell desirable pieces in zone chat or guild store. 5-10k per hour depending on to your lvl and ability to clear fast.

if you don't have a guild trader, then trader theft is the best way to go. My favorite spot is in Orsinium - Mazabakh's house and The Greedy Gut Inn, which are connected by an underground tunnel. If you do it before or after the main quest line in the DLC (during it there is one time this doesn't apply), there are something like a hundred containers you can loot with no chance of being caught between the two. Everything in the house is safe, the tunnel area is safe, the two inn bedrooms are safe. Before the main questline, the area off the bedroom area is safe; it gets populated after the quest but the walkway above it is still safe. Outlaws refuge is pretty close.

Last way to get gold without any endeavor is to purchase Cheap Elder Scroll Gold from Joymmo.com. You can choose different packages of gold depending your own needs. Moreover, compared to other sellers, our price is competitive and our delivery is faster. So, you can have a try!